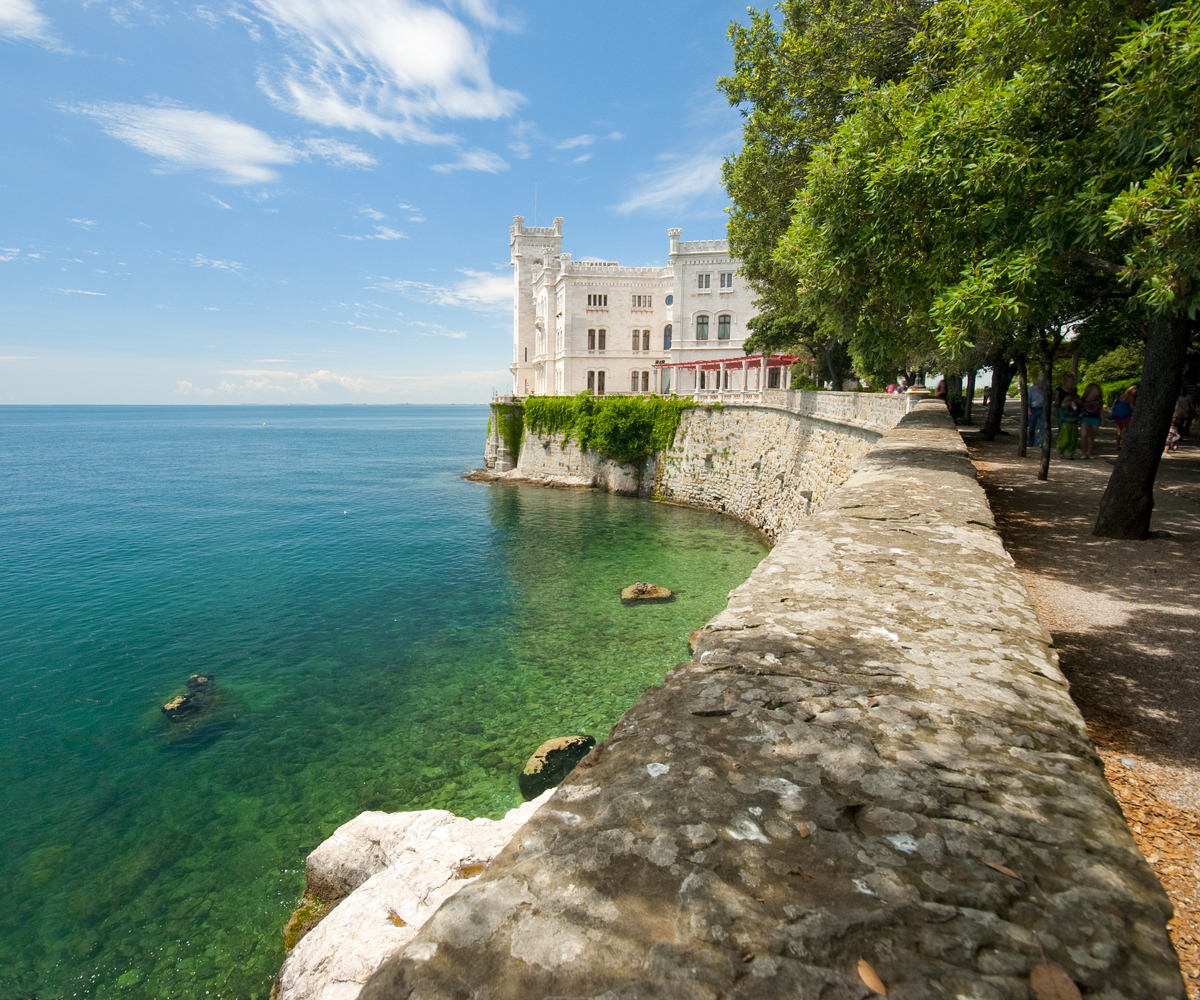 What to do in Trieste: 14 options to experience in two days.

Today the castle built by Archduke Ferdinand Maximilian of Habsburg, is a museum, which has maintained its original period furniture.
Nature lovers can immerse themselves here in 22 hectares of gardens with plants that Duke Amedeo d’Aosta, who lived here for seven years, brought back as souvenirs from his trips around the world.

This is the largest piazza on the Adriatic Sea and with its more than 12,000 sqm it is a wonderful sight, a perfect synergy between nature and human construction.
If you visit at night, you will notice blue lights on the floor, indicating how far the sea once reached. Major events took place here in the history of Italy: from the landing of the destroyer Audace, which announced to the city the annexation to the kingdom of Italy, to one of the most horrendous pages in world history, the promulgation of the Racial Laws by Benito Mussolini in 1938.

The Castle of San Giusto on the city’s highest point.

After a stroll, which will take you from the centre of the city up the hill, you will be able to visit the Castle of San Giusto and the homonymous cathedral, as well as enjoy an amazing panorama of the entire city.
A peculiarity, it is on this hill that Trieste’s first settlement was created.

Like the old sailors on one of Trieste’s symbols, the Vittoria lighthouse.

A monument to the fallen of World War I, a point of reference for navigation, but above all, a work of art. The lighthouse was built on the remnants of a rampart of the old Austrian fort and is now open to the public every Saturday and Sunday from 3 PM to 7 PM, until the second Sunday in October.

In search of modern art at the Museo Revoltella.

In the fascinating historical palace, located in the centre of the city, you can admire the most important names in 20th century Italian art: Casorati, Sironi, Carrà, Mascherini, Bolaffio, Morandi, De Chirico, Manzù, Marini, Fontana and Burri.
The museum is open every day except Tuesday, from 9 AM to 7 PM.

An excursion to the strada Napoleonica pto admire the breath-taking panorama of the Gulf of Trieste.

The itinerary, which runs from Piazzale dell’Obelisco in Opicina and ends in the village of Prosecco, is one of the most beautiful routes in the area and also one of the easiest; it can even be completed by groups with children, on foot or on a bicycle.

Lest we forget – The Holocaust in Risiera di San Sabba.

It is one of Europe’s most important historical sites and the only concentration camp with a crematorium in Italy. Today it is a national historical monument.

A botanical experience at the Villa Revoltella Park.

With its 50,000 sqm, it is a small green lung, which also accommodates a small chalet from 1860 and a pond with goldfish and turtles. It is the perfect place for a snack in the middle of nature.

An archaeological experience at the Roman theatre.

Dating back to the end of the first century BC, it is an archaeological site you will find in the heart of the city. When it was built, it was actually located outside the city walls and bordered the sea.

The municipal baths “Bagno Lanterna”, or “ll Pedocin”, the last baths in Europe where access to the beach and the sea is divided into a men’s and a women’s section, separated by a wall! A special feature and a tradition very much appreciated by Trieste natives.

Visiting the Venice-style village of Muggia.

It is the last Southward village before the border with Slovenia and a small picturesque centre worth visiting, all you will need is a couple of hours.
You can reach Muggia by car, by bus but also by sea on a ferry operated by Trieste Trasporti.

A journey back in time at the Castle of Duino.

Built in 1300, it is one of the most characteristic corners of the Gulf and one of the historic sites that were honoured to have Princess Sissi as a guest. Visiting it is a true delight to the eyes: it houses masterpieces and refined antiques such as a piano played by Liszt, and features the hypnotic Palladio staircase.

Literally a journey into the centre of the earth. You will descend to the largest chamber, at approximately 80 m underground. A guided tour is fascinating but before embarking on it, it is necessary to wear suitable clothing (it may be rather cold).
www.grottagigante.it

Osmize are spaces halfway between agriturismo and a farmer’s house, where wine and typical products are sold (eggs, hams, salamis and cheeses).
Created in the Charlemagne era, they spread in the Middle Ages and became very popular under Austro-Hungarian rule. You will find them in the karst, just a few kilometres from the city.